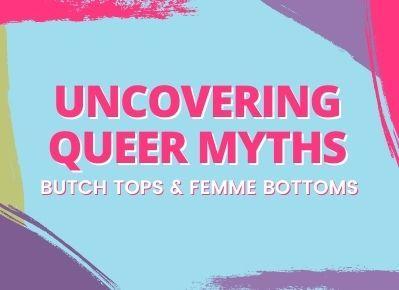 Labels are great when they help us form a congruent sense of self, discover our preferences, or communicate to others. But labels also have a tendency to reinforce binaries and create inflexible pigeonhole identities. One of the binaries I want to challenge is the top-butch, bottom-femme correlation we still see prominently in the queer community. There's obviously nothing wrong with claiming those identities; however, I personally want my labels to be evolving, nuanced, and flexible. After all, the point of dismantling heteronormativity is achieving liberation of gender and sexuality, not replicating the norms within queer spaces. I want to expand the ways we use the terms top/bottom to more accurately reflect the breadth of sexual possibilities available to us. Confined identities are not aligned with liberation. There are so many fun ways to engage with the top/bottom descriptors that eviscerate the "normal" sex script and have nothing to do with gender expression.

As you're reading, keep in mind that top/bottom are ranges, not binary options, and switching is common for most folks!

The most common use of top/bottom refers to the act of giving or receiving sensation. Heteronormative sex scripts state that the person with the penis is by default the giver and the person with the vulva is the obvious receiver. Homonormativity therefore aims to replicate this "ideal": the masculine person gives and the more feminine person receives. Hence, we get stuck in the top-butch, femme-bottom binary. I obviously object to this ridiculously narrow definition of sex for a million different reasons, but that's a different story. Either way, using the term to signify who is doing what can be useful for negotiating sex acts, and it absolutely doesn't need to be linked to gender expression. Some folks have strong preferences for predominantly giving or receiving, others like to trade roles, and you should be able to do whatever pleases you regardless of how you present. There's no right or wrong answer, per usual. Using the terms top or bottom can help communicate boundaries around being touched or receiving pleasure to pals. Currently, in queer-ships, the terms top/bottom are often used to communicate who wears the strap and who takes it (if that's on the table!).

Top/bottom can also be used literally to describe the position in which people are having sex. Again, heteronormative scripts usually depict missionary style where the penetrator is physically on top and the enveloper is on the bottom. As a result, giving and being physically on top are often linked. But we know there are innumerable ways to position yourself during sex, so the act and position are actually worth exploring separately. I've heard a few straight women describe themselves as tops, meaning they strongly prefer having their male partners under them. One woman explained that being on top gives her the control to get the exact type of stimulation during penetration she requires to come. Cool! All of this once again shows that you can top and/or bottom in a variety of different combinations!

A factor that we often neglect when discussing sexuality is sensual touch: cuddling, holding, petting, etc. Similar to sexual acts, folks can also have preferences when it comes to non-sexual intimacy. Some folks may prefer touching to being touched, or vice versa. They may also differ in whether they are the ones holding or being held. Again, topping and bottoming can be relevant to all forms of physical intimacy.

Another way of interpreting top/bottom is who's leading and following. We'll get into power exchanges in a second, but even in vanilla sex there can be one person who is predominantly calling the shots or suggesting what comes next. Again, it's a fallacy to assume that the giver is always leading, though that is one option. Folks who call themselves "power bottoms" are a good example of receivers calling the shots. Alternatively, "service tops" are givers who follow the receiver's lead. Some folks have really strong preferences about decision-making while others prefer equal input.

There's loads of different types of power exchange, but the premise is usually that a submissive lets go of power while the dominant assumes control. We often see a link between the dominant/top and submissive/bottom in power exchanges, but once again, it's possible to play in reversal. A good example of congruent roles would be in pet play where the dominant owner is giving sensations such as feeding, petting, and taking care of their submissive bottom human-animal. While, for example, we can see reversals in initiation scenes like a dominant teacher instructing a submissive student on how to perform a certain act on them. Scenes can become more flavorful when the D/s dynamic is separated from the giving/receiving role.

Within the context of D/s, power exchanges must always maintain reality-based consent. However, there are loads of ways to play with non-consent and compliance in a scene including using force, resistance, or disobeying. Some folks love being told what to do and doing it perfectly while others get a kick out of doing what they shouldn't. Still, others like the illusion of doing something against their pal's will or being forced to do something they don't want. When playing with compliance, the lines between who's in charge, who's on top, and who wants what can blur, and that's often part of the appeal. Sometimes the struggle to the top is the entire point. Similarly, you can battle to the bottom.

There are lots of ways to work with, destroy, and conform to the top/bottom paradigm; playing with the various dynamics is part of the enjoyment!

Sam (she/they) is a proud queer vulva-owner (a clam parent, if you will). They are polyamorous; she loves many people and allows each relationship to develop in mutually supportive structures. Sam has a Master in Arts from New York University in social psychology with a focus on consumer behavior. They are a sex educator, writer, researcher, avid reader, designer (with a Bachelor in Fine Arts in packaging design from Fashion Institute of Technology), and artist who does social media content creation.

Sam created Shrimp Teeth in 2018 to talk about how we communicate / approach / talk and think about sexxx. Check out their Patreon http://Patreon.com/shrimpteeth, website www.shrimpteeth.com, or email [email protected] for questions and/or collaboration opportunities!