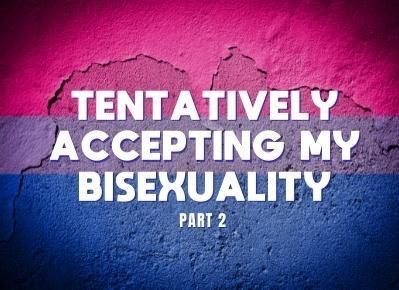 The Guilt and Freedom of My Second Coming Out

Buckle up, the story about my queerness is about to get more complicated.

Taylor. The moment we met it hit me - I'm gay. It wasn't even about her. Truth be told, we weren't good together and it didn't last long. It wasn't about her, but it was the way I suddenly understood what it meant to have ownership over my sexuality. Because of her, I acknowledged for the first time that I wasn't actually attracted to men. I'd been in hiding, passing, minimizing my queerness for about a decade. I timidly identified as bisexual, afraid that if I said "gay" out loud, someone would jump out of the bushes, point at my husband, and call me a liar. I'd internalized the inaccurate sentiment that equated the gender of my partner with my sexual orientation. After her, denying I was gay wasn't an option. I needed to be seen.

I married the boy I met in high school. Everyone assumed I was straight while I assumed I was bi. It was incredibly hard to admit, but that label didn't fit. Although I'd been struggling to feel attraction to my husband the entirety of our relationship, I did actually love him. My mother often pointed out that we were more like friends than partners, back when we would visit, and it infuriated me. I knew she was right and that made her comments feel even more hurtful. Chalk it up to internalized homophobia, or perhaps compulsory heterosexuality, but I really tried to believe I was attracted to men. Plus, my husband is fantastically cute and if I were attracted to men, he would definitely be my top pick. But it wasn't until I was able to freely explore my desires with Taylor that I understood I'd been performing attraction for years, rather than genuinely experiencing it. It's surprisingly easy to confuse familiarity with desire when you've never let yourself experience the full scope of attraction.

Although I knew almost instantly that I was gay and polyam, it was months after my first queer date before I properly came out for the second time. The first time I said, "I'm gay and I'm polyam," my husband was hugging me shortly after I'd dumped a different girlfriend. I wasn't crying over her. I was crying over him, partially. Mostly, I was crying over the loss of my old self. He naively assumed we would go back to being a monogamous and straight-ish couple after I'd had time to "explore my sexuality." That night, after dumping my girlfriend for another woman, I also broke up with him. We hadn't been properly "together" for a long-ass time, so it felt almost redundant to break up. But I needed him to understand that there was no future straight monogamous us, because I am gay and polyam. He was happy for me and absolutely heartbroken. Here's a piece of advice: don't break up with multiple people in the span of an hour. The next day was a fucking shit show of emotions.

The day after that, I felt free. I was suddenly living my truth.

Sam (she/they) is a proud queer vulva-owner (a clam parent, if you will). They are polyamorous; she loves many people and allows each relationship to develop in mutually supportive structures. Sam has a Master in Arts from New York University in social psychology with a focus on consumer behavior. They are a sex educator, writer, researcher, avid reader, designer (with a Bachelor in Fine Arts in packaging design from Fashion Institute of Technology), and artist who does social media content creation.

Sam created Shrimp Teeth in 2018 to talk about how we communicate / approach / talk and think about sexxx. Check out their Patreon http://Patreon.com/shrimpteeth, website www.shrimpteeth.com, or email [email protected] for questions and/or collaboration opportunities!