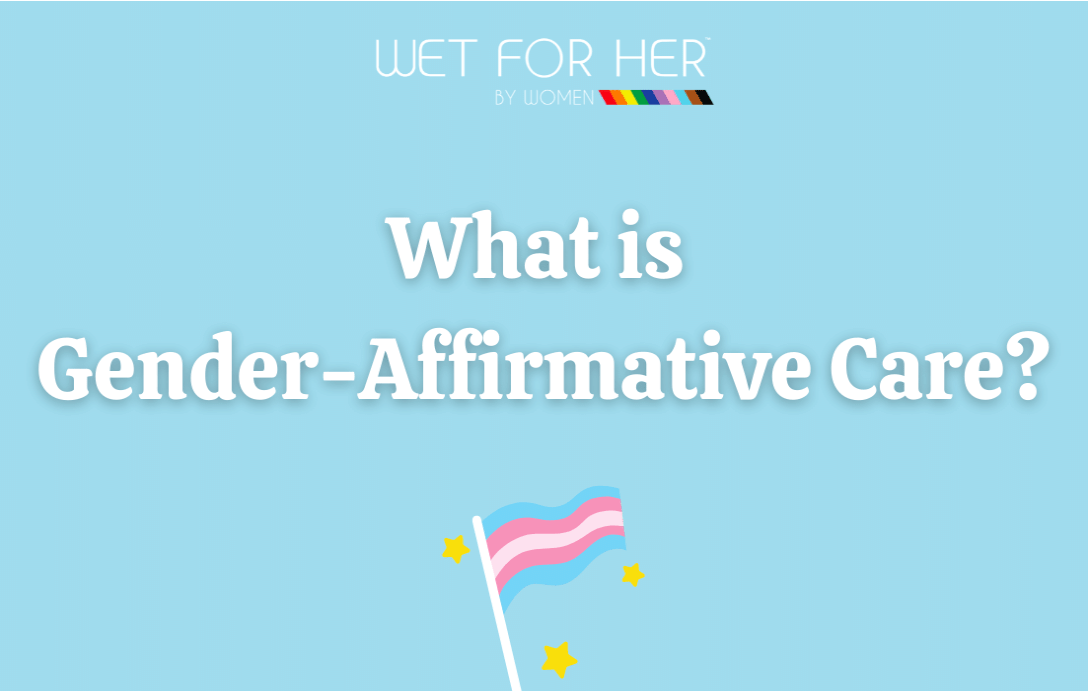 It is a social model created to uplift those combating gender dysphoria and is also meant to provide a form of harm reduction that both validates and affirms trans or GNC individuals. Gender affirmative care has become the quintessential model for the queer and lesbian community and continues to break molds in other care frameworks, such as mental health. Gender affirmative care looks different for everybody, and it also affects every single person in its own personal way. So, I’m here to break that down for you! What compromises gender affirmative care? What does it look and feel like? And why is it important?

The most crucial factor in gender affirmative care is to promote overall health and well-being for gender-expansive people. Trying to “change” or alter someone’s identity should be avoided, as it can often bring about feelings of dysphoria, anxiety, and even depression. Did you know trans individuals are four times more likely to suffer from depression than cis-gendered individuals? Here is the scientific study for you science kids and data nerds to prove I’m not buggin’. What makes gender affirmative care so valuable is its structural framework. Since it acts as a social model, it is a framework of care that is integrative, holistic, and community-based. Its success heavily relies on outsourcing care from the community and working integratively with the body, mind, and spirit. Because of this, gender affirmative care can be easily tailored to the gender-diverse person seeking it. So, in that case, what would a person typically find when they are looking for gender affirmative care? What does GAC look like?

Remember how I said GAC is based on a social model of care? This perhaps is the perfect example of that. A great way to begin social aspects of gender affirmative care is to respect a gender-expansive individual’s pronouns and chosen name. Why is this important? To maintain the integrity of the gender-diverse community, it is important to maintain basic decency and respect for these individuals, and this begins by addressing them in the proper tone, language, and names that they would prefer to be addressed by. This begins with community. Creating a supportive community is when this becomes somewhat necessary, because oftentimes many trans and GNC folks get dead-named, or when they are addressed by the name they have renounced which is associated with their gender assigned at birth.

Maintaining respect for pronouns and chosen names only appears to be difficult because of social conditioning towards heteronormativity, however, after adjusting your mindset around gender norms and their association to language, much of this can be easily adhered to.

Gender-diverse people face many questions, doubts, and overall thoughts patterns which can cause severe mental health distress. It is often incredibly helpful to discuss these with a trans and gender affirming therapist or counselor. A therapist who is skilled in trans and gender-expansive affirming care can be integral in helping a trans or gender-diverse person come out and transition to the gender that matches their identity as well as helping the gender-diverse individual accept their identity. Therapy can also help them communicate with their family or deal with possible rejection from loved ones. While many people may wish to speak with a therapist, it is not required for care, but again, can prove to be very helpful.

Talking with a counselor about a person’s preferences for clothing, grooming, and sexual wellness is also a part of gender-affirming care. Therapists can also help trans patients prepare for gender-affirming surgery or hormone therapy.

A common gender-affirming treatment is taking sex hormones. This is done mainly as a form of body modification to combat gender dysphoria and also provide a safe and affirming body for the gender-expansive person in question. A trans woman may need to take estrogen to support the growth of breasts, reduce body hair, and soften her skin. She may also be prescribed progesterone later in her transition to further feminize her body, and may take medication to block testosterone production. A trans man may need to take testosterone to deepen his voice and encourage growth of body hair. Nonbinary and other gender-diverse people may also seek gender-affirming hormone treatment.

The two main types of gender-affirming surgery for trans and gender-diverse people are top surgery and bottom surgery. Top surgery can be used to feminize or masculinize the chest.

Bottom surgery for trans feminine people can include a vaginoplasty, where a doctor reconstructs a feminine vulva and/or vagina surgically from the existing genitals. A surgeon can also remove only a trans woman’s testicles to reduce testosterone production. For transmasculine people, bottom surgery can involve reconstructing a penis and scrotum using other tissue from the person’s body.

Facial surgery is an option if they wish to make their face more masculine or feminine.

Vocal surgery is also an option for those who wish to change their voices and cannot achieve their desired outcome with speech therapy alone.

Gender Affirmative Gear (GAG) are products and clothing meant to affirm or validate the user's gender identity and gender expression.

It falls under the umbrella category of "Gender Affirmation", which are actions taken to ensure the survival and livelihood of one's gender identity, specifically the identities of trans and gender non-conforming people.

Gender Affirmative Gear (GAG) is a means of harm reduction. It is a way to validate, affirm, and uplift the voices and needs of trans and GNC individuals. When it comes down to it, gender affirmative gear can be virtually anything that provides affirmation in one's gender identity and gender expression, regardless if you identify as trans or GNC. Even cis-straight folks implement gender affirmative gear, with things like make-up and certain clothing often affirming gender expression.

Examples of Gender Affirmative Gear that you find on wetforher

Other forms of Gender-Affirmative Care

Speech therapy can help trans and gender-diverse people achieve an authentic voice and pattern of speaking that matches their gender identity. Speech therapy can also help with learning gender-specific social rules of verbal and nonverbal communication.

Laser hair removal and electrolysis can remove unwanted body hair to help a trans and gender diverse woman better match her appearance to her gender identity. Facial hair removal may be part of this care.

If a trans person wants to have children, they should consider fertility preservation. This could include sperm banking, egg storage, and ob-gyn care during pregnancy.

Victory (they/them) is a latine trans non-binary content creator, artist, social media expert, and community healer. With several years of experience as a mentor and advocate for the queer community, Victory boasts a passion for sexual wellness, trauma informed healing, social justice issues, and intersectional advocacy for the LGBTQIA+ community. In their spare time, Victory enjoys spending time outside in nature, creating art, playing video games, and playing with hula hoops and fire. You can find and support their community work, art, and business at @flowingfrequency on Instagram, TikTok, and Facebook.